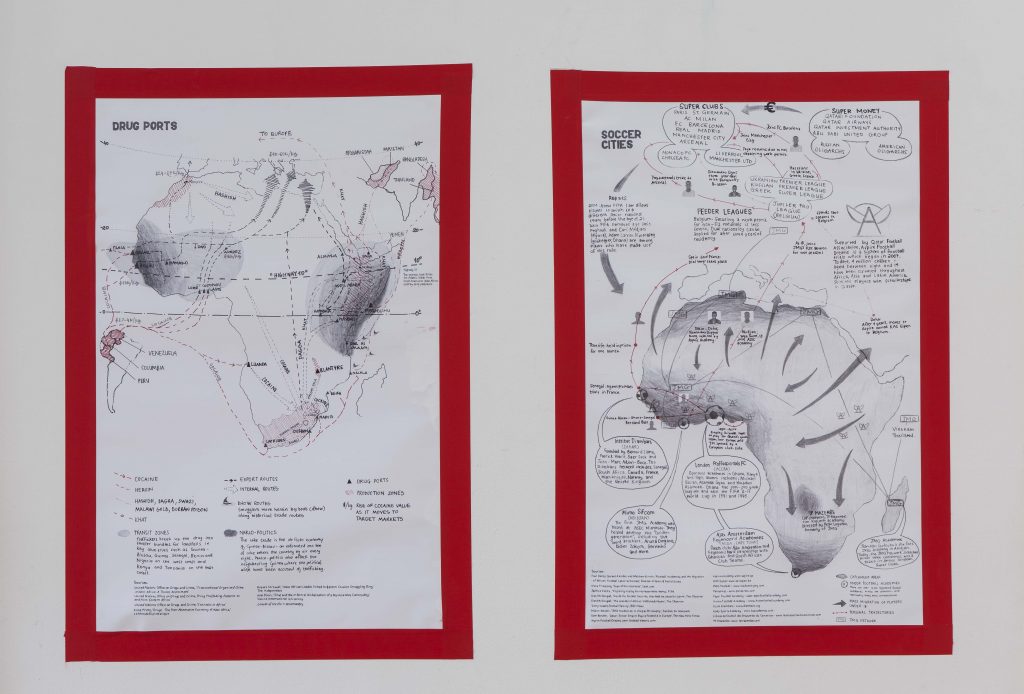 For the first UK presentation, Chimurenga infiltrated The Showroom’s building in the form of The Chimurenga Library, inserting ourselves into the existing frameworks, functions and structures of the space without displacing its everyday activities.

For the first five days The Chimurenga Library played host to PASS with a live broadcasting programme of music, interviews and events with Chimurenga collaborators in London including musicians, journalists, writers, curators and filmmakers. The live broadcast studio functioned amidst a major cartographic installation, mapping a series of ‘routes’ running throughout the building between the two floors.

Areas of interest included the work of photographer George Hallett – who used the book jacket and record sleeve as a curated exhibition space during the apartheid era; a critical look at the concept of and crude distinction drawn between Sub-Saharan and Arab Africa; and FESTAC ’77, the Second World Black and African Festival of Arts and Culture held in Lagos from 15 January to 12 February 1977.

Working with many UK collaborators such as the London-based collective Sorryyoufeeluncomfortable and UK participants of FESTAC ’77, ideas, thinking and debate will move fluidly between events, environments, broadcasts, music and sound recordings, publications, archive material and objects.

Bringing together existing work, research material and areas of interest whilst at the same time expanding focal points, the project represents a moment of activation, interaction and expansion within a mobile and complex network of geographical and organisational contexts.


The Chimurenga Library in New York also played host to the Pan African Space Station, with a live broadcasting programme of music, interviews and events with Chimurenga collaborators in London including musicians, journalists, writers, curators and filmmakers.