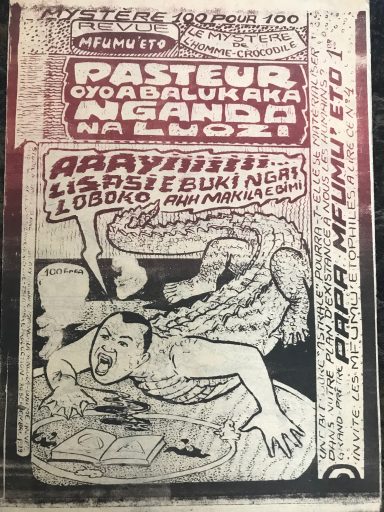 Africa has a long history of comic production that span multiple forms and formats, from popular photocomics such as African Film, produced by Drum in Nigeria, Kenya and Ghana in the early 60s; Joe published in Kenya in the 1970s; Nigeria’s Ikbe Super, the monthly tabloid that ruled its readership throughout West Africa in 1980s; the Ivory Coast’s satirical newspaper Gbich!, founded in 1998 and one-man guerrilla publishing empires such as Kinshasa’s Mfumu’Eto and Zebulon Dread’s Hei Voetsek in Cape Town that flourished in the 1990s. And more, more. Everyday.

In recent years there have been a series of international exhibitions such as Africa Comics (2006) created by The Studio Museum in Harlem in partnership with Africa e Mediterraneo, a non-profit organization based in Bologna, Italy and Picha, African Comics (2008) an international touring exhibition of 19 African comic artist produced by Picha in the Netherlands and curated by Joost Pollman that have drawn international attention to African comics.

For the most part, these exhibitions have corralled and confined African comics as expressions of national, ethnic, colonial or modern culture by arranging them according to the countries, languages and time periods they were produced in. Or they have generalised by drawing attention to how African comics give voice to “the rage, desperation, hope, and humour of daily life in Africa” by addressing issues as wide-ranging as “corruption, human rights, immigration, and the plight of women.”

In their selection of comics from Africa, the curators of these surveys have generally separated form from content, aesthetics from ethics.

Comics produced in Africa certainly embrace all of the above definitions and categories, just as they are social objects, cultural artifacts, sites of literacy, and means of survival. But what such projects fail to take into account is the specific context in which comics are produced and read, and the complex relationship between concrete lived experience and economies of the sign on the continent.

They do little to provide insight into particular themes, aesthetics and techniques that characterise African comic production. What significations do African comics share? In what languages are these significations expressed? How can these languages be deciphered? What are the specific vocabularies give them their distinctive mark, their power and magic, and makes them at once a source of escapism, distraction, excess, astonishment, and hilarity?

More than any other medium or form, comics bring to the fore the messy tangle of fertile associations between different creative modes. Working between reality and representation, word and image, and between text as experience and text as object, comics have the capacity to push at representational limits and create a hinge between the world of concepts and the world of bodily experience.

What lies at the heart of comics then, and what makes them distinct from other kinds of texts, is their blending of images and words, a combination of sequential art and text to create meaning, including narrative meaning, for the audience. The syntax of comics – specifically, its reliance on visual substitution to suggest continuity, the representation of time through space, and the fragmentation of space into contiguous images, demands an active participation on the part of the reader. This fosters a unique intimacy, a physical and emotional closeness between creator and audience, the reader and the text.

As a popular form of expression, often associated with the majority poor, the non-ruling masses living in Africa’s urban centres, and largely disseminated in via the daily press as well as in stand-alone editions, comics have largely escaped the moral and political censure of both the state and religion. In a context where there are few spaces of resistance available outside of domination (unofficial or otherwise), comics allow for ambiguous moments of duplicity and even creative, embodied resistance at the level of everyday praxis.

Through this project we examine how African artists embrace the inventive, hybrid and tactile urgency of comics to explore sex and sexuality, the shadowy dimensions of our lives and the urgent need to get beyond those limitations.

These explorations take multiple forms and embrace manifold understanding of sex and sexuality: sex as vicious satire, as a plundering against the all pervasiveness of death in the postcolony; as a symptom of a larger malaise; as an act of pleasure thrown in the face of a castrating society; as an instrument of agency and freedom against repression; and as an act of love and humanity.

The Intimacy of Tyranny

Taking inspiration from what Achille Mbembe terms the “the intimacy of tyranny,” The Lower Frequencies explores the collapse between public power and private sovereignty and the ways in which bodily needs and senses are central to autocratic domination; how obscenity, “the belly, and the penis,” constitute “the classic ingredients of commandment.”

“Instead of keeping silent in the face of obvious official lies and the effrontery of elites, this body breaks into laughter. And, by laughing, it drains officialdom of meaning and sometimes obliges it to function while empty and powerless…. by compromising with the corrupting control that state power tends to exercise at all levels of everyday life, the subject is reaffirming that this power is incontestable—precisely the better to play with it and modify it whenever possible.” Achille Mbembe, “Aesthetics of Vulgarity,” On the Postcolony, University of California. Press, 2001

In this context graphic expressions of laughter, violence, arbitrariness, bodies, tactility, and consuming presented in comics have the capacity to both enforce and subvert power; to at once mimic power and to appropriate or kidnap power and force it, as if by accident, to examine its own “vulgarity”.

“In transgressing taboos and constraints, citizens stress their preference for “conviviality”; they unpack officialese and its protective taboos and, often unwittingly, tear apart the gods that African autocrats aspire to be. In this way, an image such as that of the presidential anus is brought down to earth; it becomes nothing more than a common garden-variety arse that defecates like any other. The penis of “His Excellency,” too, turns out to be no more than a peasant’s, unable to resist, amid the aromas of everyday life, the scents of women.”Achille Mbembe, “Aesthetics of Vulgarity,” On the Postcolony, University of California. Press, 2001

The Lower Frequencies also lays bare the way comics use sex to challenge and uphold the borders between class and other identities and also between classes by giving expression to life in the vivid imagination of the majority poor living in African cities where the media are alive and are always very public and very loud. As critic Akin Adesokan suggests in an article on Nigeria’s Ikebe Super:

“The comics suggested that people valued sex, thought about it, but knew that its graphic expression must be framed within the strictures of a conservative society and available media forms.” Akin Adesokan, “On The Lower Frequencies”, The Chronic, Chimurenga, July 2014

The Lower Frequencies thus refuses the boundaries between high and low art, cartooning and comic, strips and graphic novels. Rather it directly engages public and popular forms of expression that insert themselves directly into daily life. Working with Chimurenga’s network across the continent, it curates works drawn from newspapers, magazines, street art, books and gallery spaces that circulate or have circulated in the public domain.

The project also engages how the very centrality of sex to comics opens up space for the presence of women that does not exist in the many other mediums. In comics, sex is not a means toward knowledge or transcendence of the self, as in much literature and art, but social. Sex is part of comedy’s overall attack on repression and celebration of bodily pleasure, a means of connection within the space of family and the time of generations. As such comics provide a space to challenge both the colonial strategy of dismantling extant structures of family, gender, and sexuality and the phallic, masculine expressions of power in postcolonial times.

As a medium that uses both images and text, pictures and words, comics have always transgressed languages barriers and moved across borders. At the same time, because text is an integral part of the artwork comics often resist translation. The Lower Frequencies will thus feature works in multiple languages, with translations presented as footnotes.