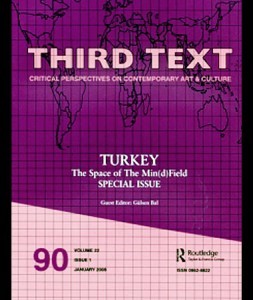 “The myth of the internationalism in art must be exploded.” – Rasheed Araeen

Third Text is a bimonthly international scholarly journal on art in global context. Since its inception in 1987, it set out to challenge the West’s position as the ultimate arbiter within arts and culture. Under the editorship of London-based artist and cultural theorist Rasheed Araeen, Third Text challenges the boundaries of the visual arts and the confines of the Western academy, featuring leading critics alongside new voices and advanced scholarship interspersed with radical interdisciplinary work that goes beyond the confines of eurocentricity.

Published in London, but designed to raise the critical temperature and the political stakes for art and cultural practice in the age of globalization, its regional focuses give voice to writers and artists outside the Western academic canon. In this respect the journal has played an important role not only in liberating already colonized discourses but also in prompting the coloniser to “decolonise his/her mind”, as the editors put it.

Initially, the magazine, considered as successor to the journal Black Poenix (1978-79), directed critique at the institutions of the British art system from the perspective of non-western artists resident in Great Britain. It questioned the marketing of multiculturalism and ethnicity, and when, during the 1990s, worldwide migratory movements evoked nationalist sentiments, Third Text turned its thematic focus to the limits of post-colonial criticism. Post-Soviet Russia, Turkish contemporary art and cinema in Muslim countries are just a few of the themes of which the Third Text has been treating since the close of the 1990s.

In 2012 a controversy erupted over the journal’s direction. Read Rasheed Araeen’s Letter to Third Text Editorial Board, Advisory Council & Supporters. for more on this. Third Text is presently edited by British film theorist, Richard Dyer and its subtitle, Third World Perspectives on Contemporary Art, has been withdrawn. With respect to the journal’s original orientation, Araeen commented: “It was perhaps a mistake our trying to represent what was no longer definable in geographical terms.”. What remains is the critique of art history and art practices from a global perspective along with the resolve to present those artists and regions precluded from mainstream discourses, or else discriminated due to their origins, gender religion or culture.