As footballers and coaches typically spiel, it’s a game of two halves. For the first 45-min, Shina Oludari gives a brief history of women’s football on the continent, revealing that despite the overwhelming favour afforded to the beautiful game and its star male players, African women have put foot on the pitches and proven that passion and skill trump gender. After the half time entertainment, we hear from two Banyana Banyana stars with a match-winning photographic assist from Jabulani Dhlamini.

Despite the bias of massive investment in the playing and marketing of the men’s game, women’s football has seen rapid growth, from the days of kicking a leather ball around a pitch for charity or physical fitness drives to the current field of dreams that boasts 176 national teams from all over the world, just 33 short of the number competing in the men’s league.

In Africa, the history of women’s football dates further back than most would imagine – long before the game was formally recognised in the 1970s. In the 1940s, games played by Nigerian women’s teams were the focus of local newspaper reportage and in the 1960s several attempts were made in South Africa to set up teams – one by a teenager, Jesse Maseko, who tried to start a girls’ high school league. In Cape Town, the Mother City Girls – also a high school girls’ team – played against local boys’ outfits.

In Senegal, a similar trend existed. But on the whole, the women’s game was largely ignored by African administrators and fans alike, until the early 1990s.

At this point in time, African teams were trying to hold their own on the world stage, making themselves seen at the first FIFA Women’s World Cup staged in China in 1991. The same year saw the launch of the Confederation of African Football’s (CAF) African Women’s Football Championship (AWFC), the first major continental competition in the women’s game and a landmark in the history of African football in general.

The inaugural event hosted eight teams, with the winning trophy going to the Super Falcons of Nigeria, who beat their Cameroonian opposition 4-0 on aggregate in the final and began Falcons’ long-held supremacy in African women’s football. The Super Falcons are the most successful team, having held the title eight times and sharing the record for the country with the most appearances at the African showpiece (10 times) with the Indomitable Lionesses of Cameroon.

Nigeria’s domination in women’s football in Africa has not been without incident. In 2000, violence reared its ugly head in the championship hosted by South Africa. Banyana Banyana took on the defending champions in the final. When it was certain the hosts would lose the much anticipated game after Stella Mbachu’s second goal, the home crowd began hurling bottles and other debris at officials and Nigerian players. After a series of interruptions  during the encounter, the game was abandoned and the tournament awarded to Nigeria.

Banyana Banyana and the Black Queens of Ghana have attempted to raise the trophy, coming close on several occasions. The former have four second-place and two third-place finishes under their belt, while the Black Queens have netted several silver and bronze medals in nine attempts at the championships. The Super Falcons have proved too hot to handle for many years, until in 2008 they were sent packing in a shock defeat by minnows, Equatorial Guinea. Four years later, the Equatorial Guineans proved their feat was no fluke when they upstaged Nigeria once again, making them the second most successful team in the history of the AWFC competition.

Read on in the full edition of the Chronic.

Playing football at the highest level in South Africa requires as much patience as it does passion, according to members of the country’s national women’s squad. The Chronic meets four players who have displayed healthy doses of both for the opportunity to don national colours and run the pitch for Banyana Banyana. Photographs by Jabulani Dhlamini. 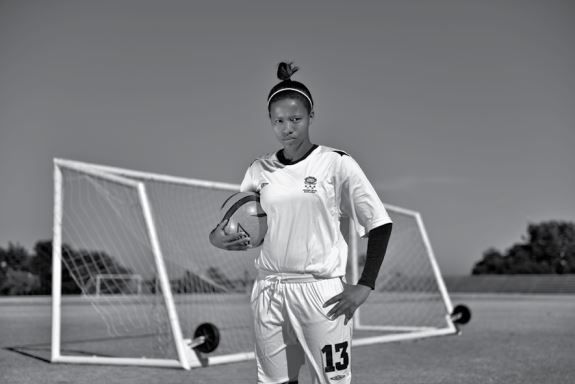 Striker, University of the Western Cape

I played for Engen Santos ladies team for just about a year then suddenly got a call-up to the Under-17 national women’s team for trials. They just qualified for the Under-17 Women’s World Cup in Trinidad and Tobago. The coach was looking to improve his squad. I showed my worth by scoring two goals on my debut against England. When we returned from the World Cup, I received a call-up to the senior national team. At the tender age of 17 I was playing for Banyana.

It’s changed my outlook. I respect the game more now. It has taught me things like patience and anger management – I used to get very angry. I learnt to keep it under control through the game. But that first love will always be the same. It can’t change because then the game will change! My love for the game keeps it interesting no matter what happens.

When I was younger I wanted to play for Sky Blue FC in the States, but that was just because Marta Vieira da Silva, one of the best players in the game, was playing for them. I always wondered how it would be to step onto a field with her, but things have changed. I’m older now and more mature. Given a choice, I would love to either go for Arsenal because they are such a traditional English team – not to mention the amazing players that play at the team – or Olympic Lyon in France. 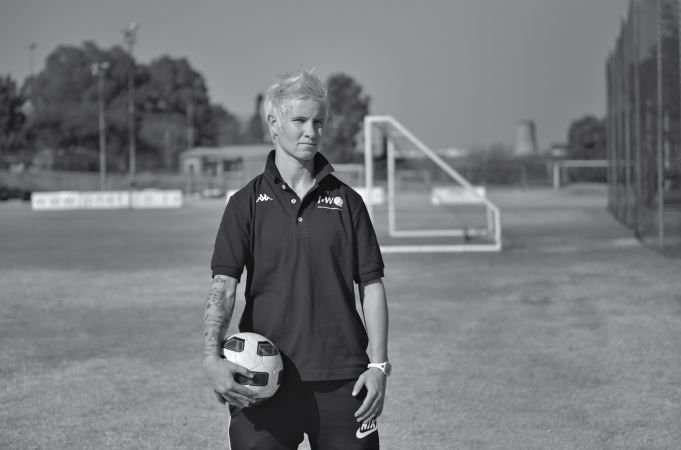 I’ve always loved football, but I never thought I would actually make it to the national team. Now that I am here, it’s such a privilege. There are lots of youngsters who look up to me and I know I have to set an example to show them that they can achieve whatever they set out to do.

I started the JVW Women’s Football Development a year ago so that I could give younger girls the opportunity to excel in the sport. It’s not a male-dominated field anymore, so I want to show them that they can excel if they work hard at it. It has been great so far.

On club level I’m currently playing for Sundowns FC. I do earn a small amount, but it is less than R2,000 a month. My dream would be to play for the USA. They are one of the best teams in the world. I want to play the best and gauge where my skills lie. 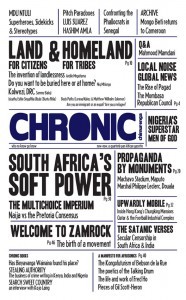 For two more profiles of Banyana Banyana players and the complete story by Shina Oludari score yourself a copy of the Chronic, available from our online shop (in print or  as a PDF) or at nearest stockists.

In this issue of our quarterly pan African gazette, artists and writers from around the world take on the philanthropic complex to unravel the philosophies of dependency and power at play in the civil society of African states.

Ready, Willing & Able
Nothing but… Grobbelaar