In an attempt to dispel the myth that renders black golfers as tangential to the ‘white pro’ or mere reflections of contemporary corruption, Bongani Kona swings wide of the bunker and straight into an archive of South African successes. Photographs by Lerato Maduna. 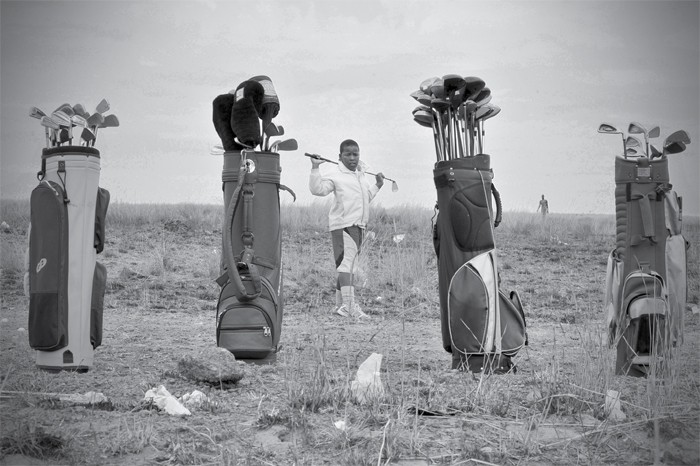 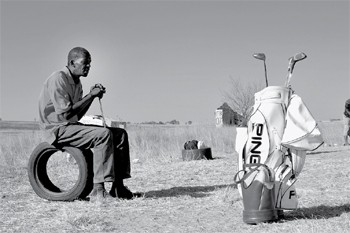 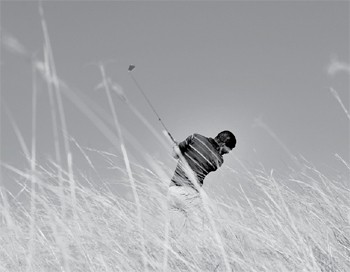 This old-timer has always dreamed of fairways. In the dead of the night, his mind would move to greens as vast as the ocean, with seagulls circling high above. For twenty-one long years, the old-timer, Johannes, worked at a golf club. Then he was let go. Many months of unemployment followed, but his golf dreams stayed alive. One Saturday morning, like the Pied Piper of Hamelin, he collected a bunch of children and set off – to play golf.

The presence of dark-skinned golfers on exclusive South African greens is often evoked as a metaphor for the new South African economy and sometimes used as shorthand for the corruption of the black elite, an essential feature of this economy. ‘Golf is contributing to two apparently contradictory processes,’ Jacklyn Cock writes in a paper entitled ‘Caddies and Cronies’. The first process, of course, is the obvious one: ‘the exclusion of the majority of South Africans’. The second is less obvious: ‘the inclusion of various forms, specifically of a new elite marked by the convergence of economic and political power.’

The point is valid, no doubt; the argument can be made that golf courses (and by extension the housing estates they are often connected to) are a man-made utopia where it is possible for the very rich to imagine a world without poor people, where the inbuilt imbalances and injustices of capitalism can be momentarily forgotten. What is more interesting is the popular idea that golf is a game to which non-white folks have only just awakened.

Paradoxically, from as far back as the early 1900s, black golfers have been finding ways to play the game simply because they loved it.

‘Bamba so’ the old-timer says to nine-year old Themba, demonstrating the orthodox way a right-hander should grip a golf club: right hand on top of the left with fingers interlocking.

Peter Sauerman, a former president of the South African Golf Association (SAGA) and one of the foremost historians of the game, dates the earliest beginnings of ‘Non- European’ golf, as it was then called, to the turn of the 20th century. ‘Caddies were playing golf way back in the early 1900s,’ he said to me in an email exchange, ‘and then on a more organised scale in the 1920s and the 1930s’. Two major developments that helped cement the earlier advances were the establishment of the Durban Indian Golf Club in 1929 and the Payneville Golf Club in Transvaal (now Gauteng) the following year. These clubs catered specifically to black golfers. By the 1950s, even in the midst of Apartheid’s ideological madness and the widespread human breakdown that followed in its wake, the game was in full swing in townships such as Alexandra and Soweto.

I’m in Diepsloot, an informal settlement in the north of Johannesburg and the oldtimer has transformed the patch of sand and grass we’re standing on into a makeshift golf academy. One by one he takes his young cohort of slumdog golfers through the basic principles of golf.

Sadly, this secret history of the great white game has been almost completely obscured. Consider this: Ramnath ‘Bambata’ Boodhan, an important pioneering figure in the history of black golfers – a former caddie at the Royal Durban Golf Club, who played in the qualifying rounds of the British Open in 1929 – hardly throws up a mention on Google. If the history of dark-skinned golfers, its highs and its lows, can turn up a blank page in so vast an archive as the internet, think of how obscure this history has become. What made the forgetting possible? 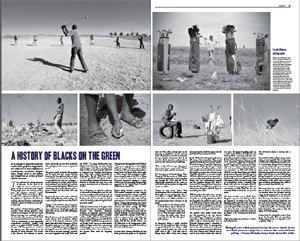 This is an excerpt from Bongani Kona‘s story published in the first quarterly edition of the Chronic.

Photographer Lerato Maduna explains how her images came about: I first visited the open fields opposite the Diepsloot informal settlement, I wanted to photograph the women who cut the field to sell grass for thatching of roofs, but I was captured by a group of kids playing golf on that field and that’s the first time I met Rueben Mathe, the man behind Diepsloot golfing academy. Back then, the school was much smaller than these images show, with a few kids sharing one golf bag and so few balls that they spent hours after practice looking for them in the open field so as to have balls for the next practice.

To read the article in full and see more of Lerato’s photos, get a copy in our online shop (in print or as a PDF) or visit your nearest stockists.

Setting The Pace is a Small Town’s Big Business
Tawfiq Saleh: To Rise and Fall on One’s Own Terms